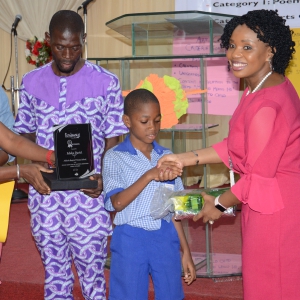 Project F.A.P.E. an art and poem competition put together by Funda Wazi Foundation for pupils of primary schools held the Grand finale on May 27 which also was the world children’s day. Mrs. Abisola Soneye, Coordinator of the Foundation in her opening remarks said the event was to further involve children in the eradication of bullying among children, a stand the Founder of the NGO Pastor Nomthi Odukoya also reiterated .She said bullies think they are bigger than others that is why they bully. Pastor Nomthi said her NGO wants kids to be involved in the fight against bully and that is why this competition was put together for kids-since they are the ones being bullied and as such know what they are facing.

The judges for the competition included Contemporary Painter and Artist: Mr.Emeka Ilechukwu, one of Nigeria’s leading performance poets and Writer Mr.Efe Paul Azino, Senior Brand Manager of Nigeria’s pioneer innovation institute (FIILM), Mar. Mr. Seun Shobo and Nollywood’s leading
actor Femi Jacobs. Ambassadors to the Foundation were also present, Honourable Desmond Elliot and Channels News presenter, Ms. Amarachi Ubani to lend their voices against bullying. Amarachi led the kids to declare the pledge against bullying as composed by the foundation for them. The kids were happy to participate and spend their day at the event as they contributed to every activity of the day including defining who and what a bully is and what to do against a bully.
The highlight of the event was the award presentation for the arts and poem category. Ten consolation prizes were given in both categories while four runners-up were also given UNICEF and Funda Wazi branded school bags for their effort. The winners in both art and poem received laptops for their effort. Adetayo Fajemisin of Halcyon Int’l School won the art category while Ibrahim Ezekiel of Baruwa Primary School won the poem category which he read to the listening pleasure of the audience.